Login
Not yet a member? Register Here
or
Login with facebook
X Search for another school
Skalooza > Utah > Skyline High School > Memorials > Patrick L Nigh
Back to the memorial list 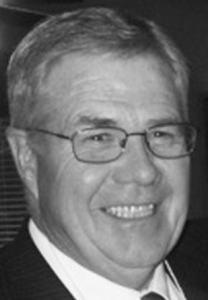 Pat was known for his smile, warm welcome and his ability to make people feel at ease; he had no enemies. When younger he loved playing baseball alongside his brothers while his father coached. He established Nigh Time Donuts in Tooele where he worked for 23 years; the most enjoyable part of his day was the association with the people of Tooele County.

He was a member of the Church of Jesus Christ of Latter-day Saints where he held numerous callings including bishop of the Erda ward. He and wife Leslie were serving as missionaries in the Salt Lake Inner City Mission. He loved serving the people of the Erda and the Pioneer 25th Wards. Patrick raised 8 grateful children. He taught his children to play sports, work hard, and be respectful and kind.

He is survived by his wife Leslie, his mother Lorraine, children Derek (Stacey), Elizabeth Spilker (Alan), Jordan (Emily), daughter-in-law Ann Shultz, Megan Pankratz (Peter), Marcus, Easton and Meredith, brothers Michael (Sarah), Kelly (Paige) and sister-in-law Nancy. Patrick had 13 grandchildren he adored and many nieces and nephews. He was preceded in death by Paul Nigh (father), Scott Nigh (brother) and his son Winston.

There have been 1 fuzzies left so far.
Sign in if you'd like to leave a fuzzy What's a fuzzy?
A "fuzzy", in this case, is a feeling or an emotion like "I miss you", "I love you", or just "thinking of you". Fuzzies can be left every day.
Comments or Memories
Sign in if you would like to leave a comment or memory.